Lactose is naturally present in milk and the amount of lactose varies between dairy products. For example, yoghurt and buttermilk contain less lactose than milk and hard cheeses contain hardly any lactose. Lactose can also be present in small amounts in products in which milk, milk powder or certain components of milk have been processed, such as chocolate products, coffee creamers and cake.

Lactose in milk and milk products 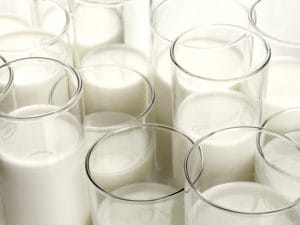 Lactose or milk sugar is a disaccharide which consists of a glucose molecule and a galactose molecule. Lactose is only found in milk from mammals (1). Mother’s milk contains on average 7.0 g lactose per 100 g; cow’s milk contains an average of 4.7 g lactose per 100 g (2). Fermented cow’s milk products contain less lactose than milk as a result of the addition of bacteria strains which split lactose into glucose and galactose during the preparation process (1). Yoghurt contains between 4 – 4.7g lactose per 100 g and the amount varies between semi-skimmed and full-fat yoghurt. Hard cheeses such as cheddar and gouda contain hardly any lactose. (2) During the cheese-making process most of the lactose is removed during the process of washing and separating the curd. The remaining lactose is broken down by lactic acid bacteria during the maturing process. Hard cheeses, which have matured for at least 4 weeks, contain less than 0.1% lactose.

Lactose differs from other carbohydrates in three main ways: