Crop farmers and cattle farmers first began to keep cows about 10,000 years ago. They discovered that cows can convert grass, which is indigestible for humans, into the valuable food product milk. This was the perfect solution for people in areas where no other crops could grow. 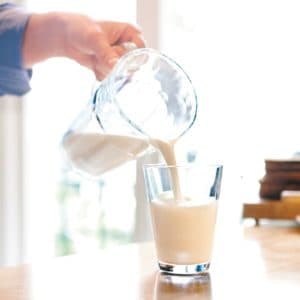 Originally, people were hunters and gathered their food however this changed with the rise of agriculture around 10,000 years ago. This transition from a nomadic society to an agricultural society spread from the Middle East through Greece and the Balkans to Central Europe. Through the centuries, our ancestors discovered that products such as apples, eggs, grains and cabbage are edible and nutritious and taste good too. They also discovered that milk from camels, horses, goats, sheep and cows is a valuable source of nutrients for people.

Initially, milk was given to children, but it appeared to be a good source of nutrients for adults as well. As a result an increasing number of adults developed the ability to digest lactose in milk. This offered an evolutionary benefit the genetic adaptation to digest lactose has grown through centuries to over one third of the world population. This is especially true in Central and Northern Europe, where dairy farming experienced a substantial growth and over 90% of the population can digest lactose.

People have also made and eaten yoghurt and cheese for many centuries. Yoghurt is assumed to originate from Central Asia. Milk was kept in leather bags or wooden barrels and with the presence of bacteria and a high temperature, the milk started to ferment, resulting in yoghurt. Sometimes the milk was kept in calves’ stomachs and the presence of rennet (a complex of digestive enzymes) acted as coagulant to give milk a more solid, cheese-like structure. Making yoghurt and cheese from milk also had the advantage of keeping the milk for a longer time.

FIGURE The rise of the dairy farming in Europe