Long-term studies have shown that calcium has no or just a limited effect on the absorption of iron in the body. A diet with a wide variety of food products probably contains dietary factors that promote as well inhibit the iron absorption. 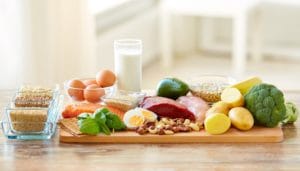 People with a low iron status or pregnant women are sometimes advised to drink milk between meals instead of during meals, because it is thought that calcium in milk inhibits the absorption of iron. Science shows different insights and the associations depends on the research method. Long-term research shows no adverse effect of calcium on the iron absorption. The same applies for milk.

The absorption of iron by the body can be examined through single-meal studies or long-term research. In single-meal studies the absorption of nutrients is determined directly after the consumption of one meal, indicating the uptake of a nutrient in combination with other nutrients. However, it could be questioned how relevant these insights are in view of a complete diet including different foodstuffs. Therefore, long-term studies are preferred in order to gain more insight into the effects over a long period.

Predictions of the effect of milk on the iron absorption have been made based on the calcium content of milk. The effect of milk on the iron uptake has been addressed in only a few studies, but results indicate that drinking milk has no or limited effect on the iron uptake. Although these studies did not include pregnant women, the advice that these women sometimes are given to not drink milk during meals has not been scientifically substantiated so far.

Some food products have been enriched with iron to increase the iron intake. In order to stimulate the iron absorption in the body, sometimes encapsulated iron, e.g. iron with an extra protective layer around it, is used. As a result, the uptake depends less on other dietary factors. This is one of the technical possibilities to promote the absorption of iron.