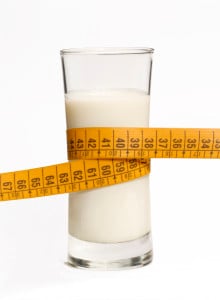 Three recent meta-analyses are available that address the role of dairy products with respect to body weight (BW) and/or body composition (BC) in adults. The meta-analyses of Abargouei et al1 (14 RCTs ; 883 adults) and Chen et al2 (29 RCTs ; 2101 adults) are partly overlapping with regard to the selection of studies, with the first only selecting studies with BW as primary outcome, whereas the latter also added studies with BW as secondary parameter. The meta-analysis of Benatar et al3 focused primarily on studies that compared cardiometabolic risk factors in function of the intake of high fat or low fat dairy products; in the analysis with regard to BW 20  RCTs were included with in total 1677 participants.

The analyses by Abargouei 1 and Chen 2 in general conclude that dairy consumption in situations without energy restriction neither leads to gain nor to loss of BW, whereas the analysis by Benatar 3 concludes that extra intake of both low and full fat dairy products seems associated with an increase in BW, with the largest effect found in interventions with low fat dairy; yet, the comparisons to controls do not take into account the extra calorie intake in the dairy interventions; the authors of this meta-analyses do not provide proper explanations for these observations. All three analyses show the difficulty of dealing with confounders in studies dealing with changes in BW due to certain interventions. The studies that are taken together in a meta-analysis are often heterogeneous in nature such that the effect of confounders such as differences in energy intake between control and interventions arms, duration of the intervention, BW at the start of the study and adequate power are insufficiently or sub-optimally accounted for.

Calcium intake has also been considered as a confounding factor in BW and BC studies, especially in studies with energy restriction. Calcium may be involved in energy metabolism and fat storage (Zemel, 2009)4 and also increases fecal fat excretion (Christensen et al, 2009)5. The meta-analyses of Abargouei 1 found that inclusion of dairy products in weight loss diets might accelerate weight reduction, including favorable effects on fat mass, waist circumference and lean body mass. The amount of dairy products used in published papers was equivalent to the provision of 550—1000 mg additional calcium for overweight or obese subjects as compared with the consumption of 300—800 mg calcium in the control groups. The reported effect size for extra BW loss from 9 included studies was 1.29 kg (duration 8-48 weeks; 430 subjects; age range 18-70 years; calorie deficit 500 kcal). Subgroup analyses for energy restriction trials also showed a pooled standard difference in means of minus 1.1 kg for fat mass (9 RCTs; 331 subjects), minus 2.4 cm for waist circumference (7 RCTs; 289 subjects) and plus 0.72 kg for lean body mass (4 RCTs; number of subjects not reported).

Recently, a beneficial association of dairy consumption with weight change and risk of becoming overweight or obese in middle-aged and older women was investigated in the Women’s Health Study dataset, a 2 x 2 x 2 factorial trial of low-dose aspirin, vitamin E, and b-carotene in the primary prevention of cardiovascular disease and cancer in female US health professionals (Rautiainen et al, 2016)6. During an average follow-up of 11.2 years 8238 out of 18438 women with normal BMI (18.5-25) at baseline became overweight (BMI 25-30) or obese (BMI>30). Multiple annual self-reported body weights per participant were analyzed in relation to dairy intakes estimated from food frequency questionnaires (FFQ). Increased total dairy intake at the last year of intake (year 17; total of 14014 subjects) was associated with an increase in BW of 1.65 kg for the highest quintile of dairy intake (at least 3.1 servings / day) versus 1.90 kg for the lowest dairy intake (0 to 1 serving /day). The difference seemed to be driven by high(er) fat dairy products. This difference seems modest. In any case, this analysis confirms that a dietary intake with at least 3 servings of dairy does not increase the risk of getting overweight.6

Dror7 performed a systematic analysis of cross-sectional, prospective cohort and intervention studies, and where possible a meta-analysis to consider evidence of associations between dairy intake and adiposity in preschoolers (2-5 years), school-age children (6-11 years) and adolescents (12-19 years) in developed countries (US, Canada, Hong Kong, Sweden, Italy, United Kingdom, Iran and Australia). Of the 36 published studies considered in the systematic review, 85 data points from 22 studies, 12 of which were conducted in the US, were taken into a random effects model meta-analysis. The age category was a significant predictor of effect size (adiposity outcomes), contrary to the exposure variable (milk vs. dairy). In adolescents dairy intake was inversely associated with adiposity (average effect size −0.26, [−0.38, −0.14], P < 0.0001), while the association was not significant in school-age or pre-school children. However, heterogeneity in study design, duration, and exposure and outcome variables was considerable, whereas adjustment for important confounders was inconsistent. Although effect size was not predicted by exposure categorized as ‘milk’ or ‘dairy’ in meta-analysis, ‘milk’ variably included full-fat, reduced fat, non-fat, plain, flavored, evaporated, condensed and cultured milks, while ‘dairy’ did or did not include dairy desserts in addition to milk, yogurt and cheese. The author concluded that more research is needed, including whether early childhood milk or dairy consumption patterns influence body composition during adolescence and later in life.

Recently Lu et al8 analyzed long-term associations between dairy consumption and risk of childhood obesity from 10 prospective cohort studies with incident overweight / obesity, BMI gain or body fat measurement by dual-energy X-ray absorptiometry (DXA). Six of these studies were also included in the meta-analysis by Dror7. In total 46 011 children and adolescents with an average 3-year follow-up were included. Dairy consumption was measured by food FFQs or 3-day diet records. Of the 10 included studies, three reported results on total dairy products, seven on milk and one on ice cream, cream/crème fraiche or cheese. Overweight and obesity were defined by age- and gender-specified BMI percentiles or the International Obesity Taskforce age- and gender-specified BMI cutoffs for children. A wide range of potential confounders including age, gender, race and energy intake were adjusted for in the primary studies.

The risk of childhood overweight/obesity was 13% lower with 1 serving/day increment in dairy intake; the highest intake group of dairy products had a 38% less risk for overweight/obesity compared to the lowest intake group (22 505 participants from 4 studies). Dairy consumption and BMI gain were not associated after weighing results from five cohort studies including 16 359 children and adolescents. Four datasets from 2 studies with in total 2353 subjects suggested a slight inverse association between dairy consumption and body fat percentage (PBF). Based on these findings the authors conclude that dairy consumption was inversely related to PBF and positively associated with BMI gain, which may reflect the fact that dairy products may promote lean body mass and consequently decrease PBF and increase BMI.