What is good nutrition for elderly people? And also, do specific nutrients play a role in the ageing process? The FrieslandCampina Institute interviewed Lisette de Groot, Professor of Nutrition and Ageing at Wageningen University. 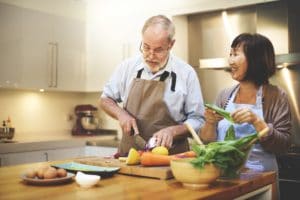 Ideally, a healthy lifestyle is strived for during the entire life. However, health can be improved by a healthy lifestyle even at an advanced age’, according to Dr. Ir. Lisette de Groot, Professor of Nutrition and Ageing. ‘This is not only about preventing diseases, it is certainly also about preservation of physical and psychological functionality.’ For an explanation De Groot refers to the SENECA cohort study. For this study about 2600 European men and women above the age of 70 were followed for 10 years; the Mediterranean diet, which includes a lot of vegetables, fruit and wholemeal products, moderate consumption of milk and milk products, meat and poultry, and which is rich in unsaturated fatty acids, was used as a starting point for comparisons . A valuable finding resulting from this study is according to De Groot that also at an advanced age (> 70 years) the combination of healthy nutrition, sufficient physical activity, not smoking and moderate use of alcohol contributes to a lower mortality rate and even may add two extra years to life.

What can be achieved with good nutrition for elderly people? De Groot: ‘One of our recent studies is the ProMuscle study in which we studied the effect of protein intake and resistance exercise in frail elderly people on their physical functioning and muscle mass. An interesting result arising from this study is that this type of exercise is effective in increasing the muscle mass, but in the frail only in combination with an increased protein intake. After 24 weeks, the group of elderly that took extra protein twice daily by drinking a dairy drink with 15 gram of protein as well as resistance exercise twice a week had significantly more muscle mass than the placebo group had, which only exercised. An important measurement in this study was physical functionality, including performance on walking some distance, do keeping balance and getting up from a chair repeatedly? These aspects reflect the impact on the quality of life of the elderly. At this moment this intervention study is translated to practice in cooperation with several care organisations and industries. We now have to wait for the results.’

Recommendation with respect to protein

Vitamins D and B12

De Groot is also much engaged in research at micronutrients level, for example into vitamin D and vitamin B12. By now, some meta-analyses demonstrate that taking a vitamin D supplementation of 20 microgram will reduce the risk of a fall or a fracture by 20-28%. The current Dutch advice for women between 50-70 years is to take daily a vitamin D supplement of 10 microgram; for men and women above 70 years a supplement of 20 microgram per day is recommended. However, only 26% of the women and 18% of the men follow these recommendations.

A UK study into the effect of vitamin B supplementation on elderly people with mild cognitive limitations points at possible protective effects on the brain, including fewer problems with memory and less of brain atrophy. (see Walker et al., 2012 and de Jager et al., 2011) De Groot was very clear in her answer to the question ‘What type of research do you expect will be conducted into nutrition for elderly people in the future?’: ‘Really a lot.’ ‘I would like to do more research into how the functionality of elderly people can be improved by means of nutrition. I would take the diet as a starting point, but I would definitely also like to know more about the influence of protein, B-vitamins and vitamin D and how these interact with other nutrients. Eventually, for me it is all about the quality of life of elderly people.’