Despite the decreasing trend in childhood mortality rates in the past two decades, death among children less than 60 months old remains high. In  2015 alone, there were 5.9 million deaths among children 5 years old and below, 2.7 million (45.8%) of which occurred in the neonatal period. Pneumonia is one of the leading causes of these deaths, estimated at 0.92 million cases. (1) The organisms that cause respiratory infections are common colonizers of the upper respiratory tract that mostly co-exist in harmony with the host. (2-3) The adult human airways have a surface area of approximately 70 m2 and is inhabited by niche-specific bacterial communities (Figure 1). (4) Recent studies have shown that these microorganisms serve key roles, such as protection against epithelial injury, resistance against specific pathogens, and development and training of the immune system (4-5).

Microbial colonization begins at birth and continues to develop for about 3 years until it resembles that of an adult (6).A study prospectively followed the changes in the microbial profiles of the upper respiratory tract of healthy children at the ages of 1.5, 6, 12 and 24 months (3). Overall, eight distinct microbiota profiles were identified. The more stable patterns were characterized by early presence and abundance of Corynebacterium/Dolosigranulum, and later, Moraxella, while the less stable profiles were characterized by high abundance of Haemophilus or Streptococcus. (3) The development of the respiratory microbiota starts in early life and is believed to be affected by factors such as introduction of solid food, day care attendance, presence of siblings, season of birth and antibiotic use. (4,7)

Comparing the respiratory microbial communities between breastfed and formula-fed infants, an observational study has shown that breastfeeding tended to support a predominance (>50% of the microbial profile) of Corynebacterium and Dolosigranulum (8), the latter of which was associated with lower wheezing and fewer episodes of mild respiratory tract infections (RTIs) (9). In another study, both Corynebacterium and Dolosigranulum were associated with absence of acute otitis media symptoms during upper  respiratory infections (9). In this context breastfeeding is hypothesized to be beneficial by directly or indirectly supporting protective respiratory microbiota in infants (8).

The infant’s mode of delivery also affects the respiratory microbiome (10). Alongitudinal study of102 healthy infants showed that those who were delivered by Caesarean section had a delay in overall development of respiratory microbiota profiles compared with those delivered vaginally (11). Furthermore, infants born via Caesarean section had reduced colonization of health-associated commensals like Corynebacterium and Dolosigranulum (10),which may contribute to the short- and long-term respiratory morbidity associated with this mode of delivery.

Lastly, using a microbiota-based machine-learning algorithm, the University of Utrecht together with the University of Edinburgh showed that children experiencing a higher number of RTIs in the first year of life demonstrate an aberrant microbial developmental trajectory that was already evident as early as the first month of life (now published) (11). In comparison with children who had only fewer RTIs, the microbiota maturation process in infants who were more susceptible to RTIs were characterized by a prolonged reduction of Corynebacterium and Dolosigranulum, early enrichment of Moraxella spp. and increased presence of low-abundant oral type of bacteria including Neisseria and Prevotella spp. The study also found that mode of delivery, type of infant feeding, crowding and recent antibiotic use are all associated with the maturation process of the respiratory microbiome, thereby potentially influencing susceptibility to respiratory disease. (11). 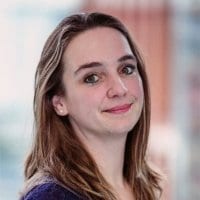 Respiratory tract infections such as pneumonia remain a major cause of morbidity and mortality among infants and young children (1). Current evidence suggests that nutrition, mode of delivery and various environmental factors influence the development of the respiratory microbiome early in life (4,8), which impacts the risk and frequency of subsequent respiratory infections in later childhood (3). Further studies are warranted to understand the complex interplay of nutrition, environment, and microbial communities to develop nutritional strategies that may positively influence respiratory health outcomes in children.