There are new insights to be gained in the area of functional gastrointestinal disorders (FGIDs) in infants and toddlers since the publication of the 2006 Rome III Guidelines. Developed by an international working group fronted by Professor Marc A. Benninga in Rome, Italy, the paediatric diagnostic criteria that were recently updated to the fourth edition will provide further understanding of how FGIDs in children under 5 years of age can be effectively managed.

Neonates or toddlers with infant regurgitation, defined as gastrointestinal reflux that involves throwing up of stomach contents, are diagnosed based on the occurrence of at least twice-daily regurgitation for more than 3 weeks. According to the newer guidelines, prevalence of infant regurgitation among children aged 3 to 12 months ranged between 41% and 67%. However, when diagnosing with Rome III criteria, the prevalence was detected to be lower at 26%.3

Although infant regurgitation generally resolves spontaneously over time, the treatment for infant regurgitation may consist of specialist referral to a paediatrician or paediatric gastroenterologist when symptoms are indicative of the disorder in infants beyond onset age. For infants with age of onset at greater than 1 week and less than 6 months, treatment centres on improving the frequency, volume and technique of feeding. If symptoms do not improve sufficiently following correction of feeding methods, Professor Benninga recommends a combination of parental reassurance and thickened feeds with an anti-regurgitation formula. He cautioned against repositioning infants during feeds as it offers only marginal improvements. 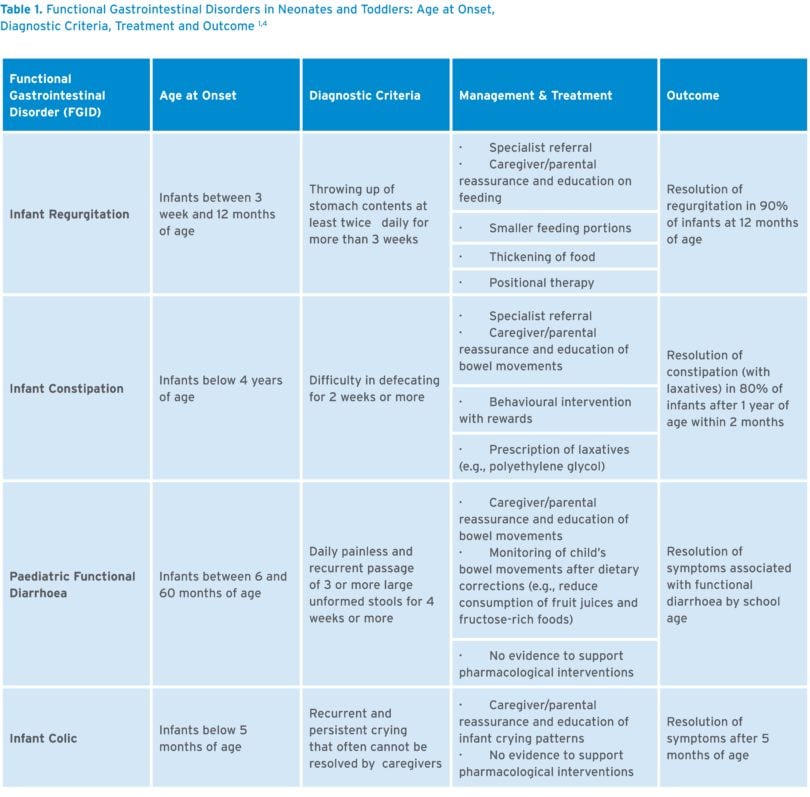 Infants or toddlers with functional constipation, defined as repeated attempts of (un)voluntary withholding of faeces for reasons such as avoidance of unpleasant defecation, are diagnosed based on fulfilment of two or more criteria including two or less defecations per week, history of excessive stool retention, history of painful bowel movements, history of large stools and/or presence of faeces in rectum. Although recent studies have suggested that the prevalence of functional constipation in infants ranges between 3% and 27%,5–7 the overall average prevalence worldwide was 18%.3
In his presentation Professor Benninga highlighted that the manifestation of constipation in infants could have arisen from two other scenarios: infants who are not exclusively breastfed or infants who have cow’s milk protein allergy (CMPA). In such cases, it is essential to consider the differential diagnoses, and medical care consisting of probiotic supplement, water and mineral oil as alternative treatments should be carefully reviewed. He also noted, contrary to belief, that there is little evidence for “lazy bowel syndrome” commonly associated with laxative use to stimulate defecation. If no or only partial improvement is noticed with parental reassurance and family education, physicians may consider treatments including prescribing lactulose, polyethylene glycol (at least 6 months), rectal glycerine suppositories for acute relief of constipation and the dietary management with extensively hydrolysed infant formula upon suspicion of CMPA.

Children advancing from infancy and through into early school years are diagnosed with functional diarrhoea when they have painless, large and unformed bowel movement at least 3 times per day. Although breastfed infants are known to defecate softer stools and more frequently than formula-fed infants, there is no evidence for functional diarrhoea unless a health history including visible mucus and/or undigested food particles in stools are observed for at least 4 weeks or more.1 Notwithstanding the lack of new evidence about aetiologies or prevalence data in recent years, the prevalence of functional diarrhoea in children during the first 3 years of life living in the United States was estimated to be 2% according to a cross-sectional survey.3

Unless Hirschsprung’s disease or other physiological abnormalities are expected, Professor Benninga pointed out that physicians can benefit from understanding the cultural factors influencing defecation practices and toilet training methods so as to better treat and manage functional diarrhoea in infants and toddlers. Additionally, he recommended parental education and dietary management as viable management techniques for infant diarrhoea.

The sound of a colicky infant can be annoying, and in many cases, excessive crying can leave parents feeling anxious and depressed as they have difficulty coping with the hard-to-soothe behaviour. Prevalence estimates of colic among healthy and well-fed infants vary from 5─19%, and a review of the literature shows that there is a wide variation in the prevalence of infantile colic between populations.3

There are two schools of thought that dominate the current literature for distinguishing infant colic from other FGIDs, according to Professor Benninga. The first school of thought, which is epitomized by St. James-Robert I, maintains that unexplained and excessive infantile colic has a non-gastrointestinal origin centring on a developmental phenomenon.8 A second school of thought notes that infant colic has instead a gastrointestinal origin that could arise for a whole host of reasons including lactose intolerance, gastroesophageal reflux disease, gastrointestinal motility disorder, or the effects of probiotics on gastrointestinal motility in infants.9 For these reasons, it is worthwhile considering dietary modifications involving extensively hydrolysed infant formula.

It is interesting to point out that colic may also be suggestive of an infectious origin, especially in infants with urinary tract infection.10 However, according to Professor Benninga, this accounts for less than 5% of all cases of infant colic. Despite the knowledge of various aetiologies and the insights into the role of intestinal microbiome in shaping infant gut health, the prevailing management paradigm for infant colic does not support the use of probiotics.11–13

Infant rumination syndrome, cyclic vomiting syndrome (CVS) are relatively uncommon compared to the other FGIDs discussed. Of note, CVS, which is characterized by recurrent episodes of intense nausea and vomiting lasting from hours to days, has a prevalence of 0.2─1.0% among neonates and 3.4% among toddlers living in the United States.1 Similarly, rumination syndrome in infants, which is the habitual regurgitation of stomach contents into the mouth for the purpose of self-stimulation, is associated with an even lower prevalence of 1.9%.3,14 In contrast, the prevalence of infant dyschezia, a condition where children exhibit crying episodes due to straining on defecation for at least 10 minutes, was reported at 2.4%.3 Comparatively, lower prevalence figures were found for these lesser-known FGIDs. As could be expected, Professor Benninga urged the need for more research to be conducted in order to explore and expand our understanding on these uncommon FGIDs.

Misdiagnosis and inappropriate treatment for childhood FGIDs can lead to needless psychological distress and negative health outcomes. Yet, such possibilities should not necessarily be terrifying to parents. In this instance, mitigating the distressing effects of childhood FGIDs through effective reassurance and appropriate treatment strategies will prove beneficial for parents caring for young children. Professor Benninga reiterated that taking a wait-and-see approach in the treatment of FGIDs in infants and toddlers might work against parents’ interest on the whole. For instance, the dichotomy between doctors who “wait and see” and those who “go ahead and prescribe laxatives” for functional constipation can lead to a 20% increase in treatment success within 2 months.

In the end, Professor Benninga concluded that “Rome was not built in a day.” Overcoming the challenges posed by the management of paediatric FGIDs would necessarily involve expert training in identifying symptoms, precise diagnosis, and offering appropriate treatment strategies. He urged paediatricians to transform future discussions ­─ ahead of the fifth edition of Rome criteria ─ by researching into the diagnostic criteria for failure to thrive and paediatric feeding disorders that might bring considerable distress to the parent-infant interaction; keeping in mind the cross-cultural and quality of life issues faced during childhood FGIDs.