The recognition that the behavioral and physiological changes as well as the increasing levels of physical activity of toddlers require sufficient energy and macronutrient intake, have led to the development of recommendations for macronutrient intakes. Achieving the recommended intakes is vital to meet the energy needs and ensure optimum growth and development of muscles, bones and brain tissue. 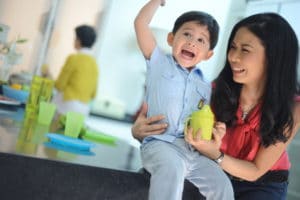 After the first year of life, weight and height gain are not as rapid as during the first months, but still growth rates are very high.1,2  A toddler becomes more active, and is rapidly developing motor and thinking skills. By the age of two years, the muscle mass has increased and the bones are lengthened. The percentage of body fat significantly decreases from 23% in the first year of life to about 18% at the age of three,3 while a large proportion of the brown fat tissue, responsible for thermogenesis, is significantly lowered.4  Brain development is still very rapid.5,6

The behavioral and physiological changes observed at this life stage determine the toddler’s requirements in energy and macronutrient intake. To meet these nourishment needs, several organizations have published recommendations.7-13  The recommended energy and macronutrient intakes for toddlers and how these can be reflected in food groups are presented in tables 1 and 2 respectively. 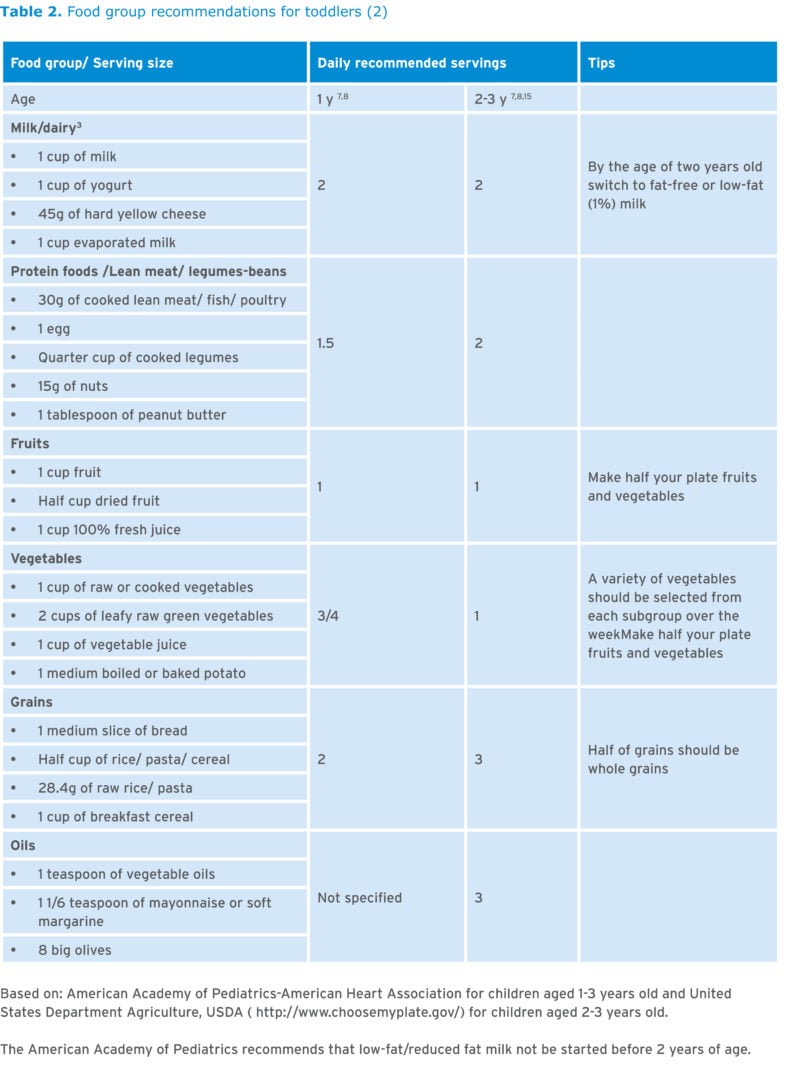 The total energy needs per kg body weight for toddlers are lower than in infancy, but still much higher than in adulthood since the metabolic needs for growth have to be covered.10

Fat intake requirements gradually decrease from >40% of total energy intake (E) in the first year of life to 20-35% E after the third year of life.9,13  At this stage, there is an increased need for alpha-linolenic and linoleic acids, two essential fatty acids with an important role in normal growth and development.15  Regardless its importance as a dense source of energy and essential fatty acids, fat also facilitates the absorption of fat soluble vitamins.13,14

Protein intake requirements of toddlers, as a percentage of total energy intake (E), are much lower compared to older children and adults, but still the recommended absolute values (g/d) are quite high to ensure optimum growth, since protein contributes to normal development of muscles and bones of toddlers.17

Carbohydrates function primarily as an immediate energy source for the toddler’s daily activities.18  Similar to adults, an intake of 130 g per day has been estimated to be sufficient to cover glucose needs for the brain for children older than one year of age.12 This recommended intake of carbohydrates is expected to be derived mainly from the consumption of starchy foods (i.e. bread and cereal products), but also from other food groups such as fruits, vegetables and milk, whereas foods containing added sugars such as carbonated beverages and sweets should be limited.7,12

Are toddlers meeting the recommended intakes for food groups/ nutrients?

Several studies in the US and Europe indicate that the percentage of energy derived from saturated fat is above the acceptable range,19-22 while the opposite was observed for mono-unsaturated and poly-unsaturated fat.19,22  Indicatively, as reported in a Belgian cohort, more than 70% of the toddlers were found to have percentages of energy derived from mono-unsaturated and poly-unsaturated fat below the recommended ranges.19  Low fish consumption (as primary source of the long chain poly-unsaturated fatty acids docosahexaenoic acid (DHA) and eicosapentaenoic acid (EPA)) has been reported among others in Belgium23 and the Netherlands.22  In the Netherlands, 91% of the boys and 80% of the girls aged 2-3 years old were not meeting the recommended fish intake of two portions per week.22

Regarding protein, in most of the studies the recorded intakes exceed recommended levels.19-21  Indicatively in Belgium it was reported that the percentage of energy derived from protein was above the acceptable macronutrient distribution for 67.8% and 85.5% of the boys and girls respectively.19

Regarding carbohydrates, although the usual intake of toddlers seems to meet the requirements,19-22 dietary fiber intake19,21,22and fruit and vegetable consumption seem to be below recommendations.22,24