Most immune mediators and factors in human milk are also found naturally in cow’s milk, except human milk oligosaccharides (HMOs).1 HMOs make up 8% of the dry matter of human milk and are the third largest component in mother’s milk. Their key role is in shaping of the infant’s gut microbiome and establishing immunity later in life.2-4 Most contemporary supplemental infant formula are fortified with prebiotic oligosaccharides like GOS, and recently HMOs were introduced.

There are currently over 200 different HMOs identified in human milk5 and of these, 2’-fucosyllactose (2’-FL) is the most abundant.6 Recent human association-studies have shown that the levels of 2’-FL vary among mothers as determined by their FUT2 secretor status.7 Higher levels of 2’-FL are associated with a lower risk of Campylobacter-associated diarrhoea.8 Also, 2’-FL and prebiotics seem to contribute to the growth of different strains of beneficial Biﬁ dobacteria. Biﬁ dobacteria are thought to be beneficial for gut health.9 Evidence also suggests that 2’-FL may play a role in the reduction of risk for allergic disorders, such as eczema,10 as well as in reduction of systemic inflammation.11 Clinical trials have shown that 2’-FL supplementation is safe and well tolerated in infants and adults12,13, and 2’-FL has recently been introduced in commercial infant formulas.

Aside from milk oligosaccharides, milk fat and its component – milk fat globule membrane (MFGM), have been documented to provide similar benefi ts to gut barrier integrity in intervention studies in infants and adults.14,15 They are associated with improved infant gut microbiome composition and infection control,16,17 as well as enhanced cognitive and behavioural regulation in children.18

Heating denatures most of the immunologically active milk proteins and alters these proteins through the process of glycation.19 Studies have shown that consumption of raw cow’s milk instead of heated or processed milk is associated with less childhood asthma, allergies and respiratory infections (Figure 1).20,21 Lactoferrin, which is a component of whey in cow’s milk, has shown protective effects against late-onset sepsis and necrotising enterocolitis in preterm infants.22,23 Bovine osteopontin alters amino acid metabolism and cytokine response, as well as lowers the prevalence of pyrexia in infants.24 Bovine IgG promotes phagocytosis of pathogens and has been shown to prevent in vitro infection of human cells by human respiratory syncytial virus (RSV).25 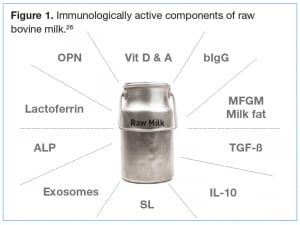 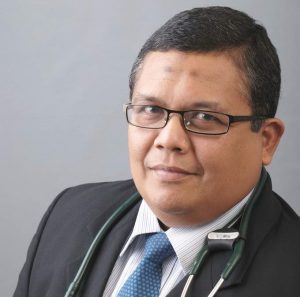 The diagnosis of CMPA starts with a comprehensive history taking, which includes a detailed timeline and documentation of triggers for each symptom.27 IgE-mediated CMPA is often diagnosed based on a history of acute reactions.27 On the other hand, non-IgE–mediated CMPA often manifests as chronic disease (Table 1).28,29

If suspected, cow’s milk can be eliminated for a month and reintroduced via an oral food challenge. Consider appropriate risk stratification of allergen reintroduction (e.g. office-based versus home challenge).27

A 4-month-old girl was given milk formula for the first 2 weeks. Thereafter, she was fully breastfed. She was noted to have moderate-to-severe eczema (SCORAD was 55.6 at 4 months and 49.6 at 5 months). Her mother was advised to discontinue providing dairy in her diet for the next 4 to 6 weeks. An allergist was consulted for food allergy testing and a skin prick test showed a 15 mm wheal with cow’s milk. Her IgE to milk measured 10.3 IU/L.

The diagnosis for this case was IgE-mediated CMPA. In this situation, extensively hydrolysed formula (EHF) was the first choice of feeding for 6 to 8 weeks. Processed cow’s milk products, including baked goods, cheese or yogurt should be avoided until evaluation for safe introduction under physician supervision. In case a patient continues to be unresponsive to EHF and growth starts to falter, an amino acid-based (AA) formula may be used as an alternative (Table 2).30-32 Although soy formula can be considered as first line alternative to cow’s milk formula in some guidelines around the world if there are economic constraints or lack of EHF availability,33,34 it is generally not recommended for infants less than 6 months old if alternatives such as EHF and AA are available.33,35 The risk of both soy allergy and CMPA developing  in infants less than 6 months old is high in certain ethnic populations; approximately 10-15% of infants allergic to cow’s milk also react to soy.34 Hence, soy formula cannot be recommended as first choice of formula for infants with CMPA.  Moreover, the absorption of minerals and trace elements from soy formula may be lower compared to cow’s milk formula because of its phytate content. Soy formula also contains isoflavones with a weak oestrogenic action that may lead to hormonal effects in infants.35

At 10 months, her eczema improved. However, she later developed facial hives and became irritable after she had a few bites of bread. No treatment was provided by her mother as the lesions were self-limiting.

A safe, physician-guided introduction of cow’s milk in the right form and quantity is an important part of patient care in this case, as about 70 to 80% of patients with CMPA should be able to tolerate baked milk products with 20% reacting to the cow’s milk in baked form.38 Food challenges may be diagnostic but are recommended to be done in a setting with equipment for resuscitation.38 Recent research has focused on the safety, efficacy, and mechanism of oral immunotherapy (OIT), such as baked cow’s milk immunotherapy, as a disease-modifying treatment.39 It is not safe for children with CMPA to consume  goat’s milk or sheep’s milk because of a high rate of cross-reactivity with cow’s milk.35

A 3-month-old Malay boy was breastfed from birth and the mother had an unrestricted diet. Cow’s milk formula was introduced for the first time at 3 months old. Approximately 2 hours after ingesting 90 mL of cow’s milk formula, he became irritable and had bouts of repetitive, non-bloody, non-bilious vomiting. Later in the day, he had afebrile, non-bloody, mucoid diarrhoea.

At the emergency department, he was found to be lethargic, hypotensive, pale and had signs of dehydration. He was worked up for sepsis and had empiric antibiotic therapy. Serum chemistry work-up revealed results compatible with dehydration. His blood count showed leukocytosis with a left shift and his stools were positive for occult blood.

He improved within 2 hours of intravenous fluid hydration and was discharged when results of his cultures were negative for bacterial growth. The acute dietary management of FPIES involves the use of EHF, soy-based or AA formula. In chronic cases with faltering growth, AA-based formula is preferred over EHF and soy.40-42

A boy was exclusively breastfed since birth until he was 7 months old. He had a history of moderate eczema. At 9 months old, he was given two teaspoons of a yogurt dessert and within 5 minutes, he developed a generalised rash accompanied by a hacking cough and vomiting. He was reported to have been “blue around the lips” and was then rushed to the emergency department. He was given intramuscular epinephrine, diphenhydramine and was nebulised with salbutamol. His symptoms resolved overnight.

At 10 months old, he was subjected to a food panel skin prick test where he tested IgE-positive to cow’s milk, egg white, peanuts and wheat.

Milk anaphylaxis is a severe and possibly fatal condition necessitating immediate care and treatment. AA-based formula is the breastmilk substitute of choice but a hospital-based challenge with EHF may be considered to encourage milk tolerance.43,44

There has been a steady increase in the prevalence of allergic diseases globally. Because of its life-threatening nature, severe CMPA is considered as a significant issue by clinicians all over the world. Clinical practice guide-lines addressing CMPA management have been published to help improve standards of care and ultimately, to improve the quality of life of patients with this type of allergy. Below is a comparison of dietary formula recommendations for the CMPA spectrum of disorders across various guidelines (Table 3). 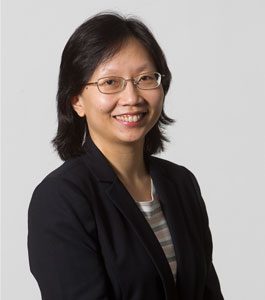 A 7-month-old female infant was breastfed since birth. Rice cereals were introduced into her diet recently.  Her mother was concerned that she had constipation. She passed stools once every 5 to 6 days and is observed to strain until her face turned red. Whilst she was usually successful in passing stools after straining, there were times when she is unable to. Her stools were mostly pasty in consistency. Of note, she had passed meconium on the first day of life. She is active and growing well. On clinical examination, she was not atopic and had an otherwise normal physical evaluation.

The diagnosis of infant dyschezia was done based on the Rome IV criteria and should be made if both of the following criteria are present in an infant younger than 9 months of age: (1) at least 10 minutes of straining and crying before successful or unsuccessful passage of soft stools, and with (2) no other health problems.45 Since this condition is often self-limiting and resolves when the infant learns how to coordinate increased intraabdominal pressure with pelvic floor relaxation, the management would be parental reassurance and watchful waiting. Clinicians should advise against rectal stimulation and unnecessary laxative use.

Breastfed infants tend to have more bowel movements per day and softer stools compared with formula-fed infants.46 Infants who have functional constipation and are formula fed (standard cow’s milk)  may benefit  from a switch to  a partially hydrolysed whey formula with added prebiotics and/or probiotics.47 In addition, the feeding of GOS-containing formula has been shown to benefit faecal composition, microbiota, as well as  stool consistency and frequency.48

A 5-year-old boy was seen in the clinic for complaints of abdominal pain and bouts of loose stool. His parents felt that his stomach looks “bloated” at times.  Dairy products, especially milk or ice cream, appeared to make it worse but he could eat small amounts of yoghurt or cheese without any issues. There were no other food triggers and he had no night-time pain. There was also no blood or mucous in his stool. His growth was tracking along the 50th percentile.

A diagnosis of carbohydrate mal-absorption was made. Carbohydrates (particularly dietary sugars) which are not absorbed remain in the intestinal lumen and may result in an osmotic diarrhoea. In addition, these carbohydrates  may be fermented by gut microbiota to form gas, leading to symptomatic bloating and increased flatulence.49 Most carbohydrate malabsorption syndromes resolve upon restriction of the offending sugars.50 In children with irritable bowel syndrome with bloating and/or loose stool, there is emerging evidence  that restriction  of fermentable oligosaccharides, disac-charides, monosaccharides and polyols (i.e. a diet low in FODMAPs) may help improve symptoms.51

It is important to differentiate the signs and symptoms of functional gastrointestinal disorders (FGIDs) associated with diarrhoea from chronic diarrhoea as a result of underlying organic pathology. Red flags in children with chronic diarrhoea are shown in Table 4.52 In summary, FGIDs are common in children of all ages and comprise a wide range of conditions that are not attributed to structural or biochemical abnormalities.53 The diagnosis of FGIDs are guided according to the symptom-based Rome IV criteria (Figure 2).53,54

Physicians have an important role in emphasising the benefits of breastfeeding and offering mothers appropriate support to continue breastfeeding. In most infants with FGIDs, parental reassurance and anticipatory guidance are all that is required. Occasionally, advice on feeding (i.e. feeding technique, volume and frequency), as well as restriction of dietary triggers (mother’s diet, if breastfeeding) or modification of milk formula may be needed in the dietary management of these common FGIDs.