During the 3rd FrieslandCampina Institute symposium on 14 July 2018 in Cebu (Philippines), Dr Ahmad Suryawan discussed the multiple effects of early nutrition on the cognition and immunity of infants and children.

Early nutrition in utero and in childhood have direct and indirect effects on an infant’s brain growth, development and immunity, which in turn impact the child’s long-term cognitive performance and physical health. These effects are influenced by specific nutrients and the timing at which they are delivered during early life. The human brain grows rapidly in utero and reaches up to 80% of its adult weight within the first 2 years of life (1). During this period, the brain undergoes rapid neurogenesis, neuronal proliferation and myelinization, all of which are dependent on optimal nutrition. Hence, proper nutrition during this period is crucial to the child’s brain development.

While all nutrients are important for neuronal growth and development, the most crucial ones are protein-energy, long-chain polyunsaturated fatty acids (LC-PUFA), iron, zinc, copper and choline. Table 1 shows the role of these nutrients and the brain circuitry most susceptible to deficiency of these nutrients (2). Other essential nutrients during the first few years of life include folate, selenium, iodine and Vitamins A, B6, B12 and K. 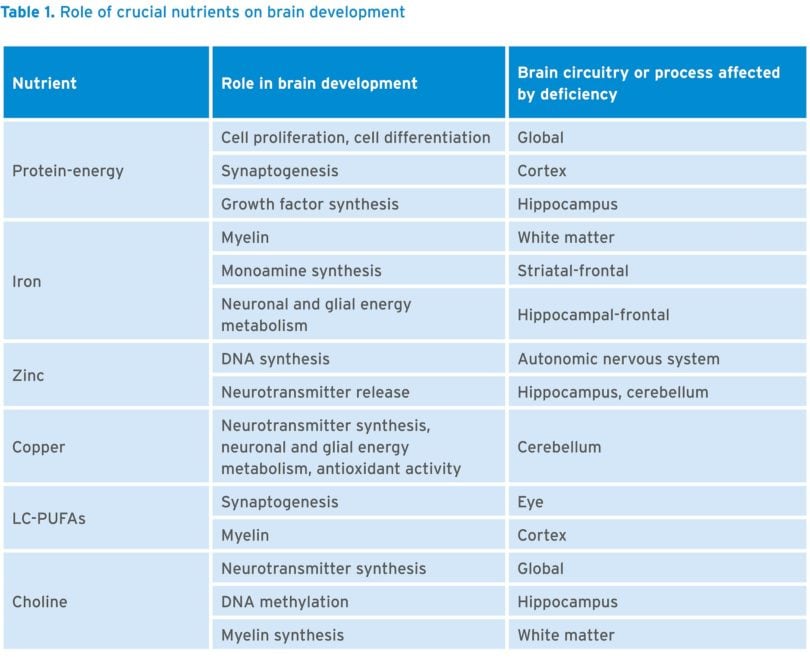 For some of these nutrients, it is particularly important to provide them in adequate amounts during critical periods of development (Table 2), when the brain is most sensitive to environmental influences or stimulation (3-4). Mothers and paediatricians should pay especially close attention to the nutrition received by infants during these crucial times. The child’s developing immune system forms a triad with nutrition and cognitive function. Several nutrients that promote brain growth and development are also essential for optimal immune response. For instance, vitamin A helps maintain mucosal barriers; zinc, selenium, iron and copper are crucial for both innate and adaptive immune function; and LC-PUFA has anti-inflammatory effects that could reduce the risk of chronic inflammatory conditions (5). Moreover, immune factors can have profound effects on the central nervous system, such as in the regulation of neurogenesis, neural death, proliferation of neurons and glial cells, and synaptic pruning. Hence, adequate nutrition also supports brain growth and development through modulation of the immune system.

Several studies are currently  exploring the role of nutrition on epigenetic mechanisms that regulate brain development and the role of microbiota and probiotics during early childhood on brain growth and development (6-8). Early animal studies show that microbial colonization of the gut could initiate signalling mechanisms that affect neuronal circuits via the brain–gut–microbiota axis (6).  Specifically, germ-free mice display increased motor activity and reduced anxiety compared with mice with normal gut microbiota, which could be related to changes in expression of genes involved in messenger pathways and synaptic long-term potentiation in related regions of the brain. Emerging clinical evidence also suggest that gut microbiota influences neural pathways and plays an important role in infant development (9). This could potentially lead to early nutritional interventions that supplement or modulate childhood gut microbiota to enhance brain performance.

Proper nutrition during early childhood is crucial in regulating brain growth and development, long-term cognitive performance and immunity. While these processes require a multitude of nutrients, some nutrients, including protein-energy, LC-PUFA, iron, zinc, copper and choline have greater impact than others at specific periods of brain growth and development. Therefore, clinicians should be mindful of providing the right nutrients in adequate amounts during critical time periods, to help ensure optimal brain and immune development.