Double burden of malnutrition is defined as the persistence of undernutrition and the rapid rise in overweight and obesity. The usual pattern of malnutrition was undernutrition being more prevalent in developing countries while obesity was a common occurrence in developed countries. However, with rapid urbanization, unlimited food access, and lifestyle changes, a trend towards increasing incidence of overweight and obesity has been observed in developing countries.1 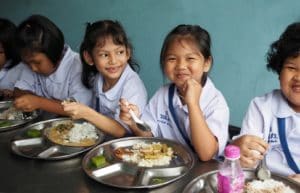 Height and weight are the most commonly used anthropometric measures to assess adequate growth of a child or a group of children. Height-for-age reflects linear growth and can measure stunting. Weight-for-age represents a synthesis of both linear growth and body proportion and can be used to diagnose underweight children. On the other hand, body mass index-for-age is a useful screening tool for thinness, overweight and obesity.8

Another public health concern which has a negative impact on a child’s development is micronutrient deficiencies. To determine the micronutrient status of the children, blood analysis was done among subsamples in the study. Blood samples were taken from all children to determine prevalence of anemia. For monitoring Vitamin A and D deficiencies, only blood samples from children aged 6-12 years (11.9 years for Vietnam) were included. Anemia was defined as Hb concentrations <110 g/l for children 0.5-4.9 years; <115 g/l for children aged 5-11.9 years; and <120 g/l for those ≥12 years old. Regardless of age group, Vitamin A deficiency was defined as having serum retinol concentration <0.70 µmol4-7,9; while a concentration <50 nmol/l of circulating 25-hydroxyvitamin D was indicative of Vitamin D insufficiency.4-7,10

As seen in Figure 2, prevalence of anemia was comparable among rural-based and urban-based children in Indonesia, Malaysia and Vietnam.4-5,7 In Thailand, anemia was more prevalent among children in the rural areas.6 But among all the four countries, Malaysia had the lowest number of anemic children.5 In all four countries, Vitamin A deficiency had a low prevalence, with rural-based children being more Vitamin A-deficient compared to their urban counterparts.4-7

Despite being in tropical countries, a high prevalence of Vitamin D insufficiency was observed among the subjects.4-7 Clothing practices, skin pigmentation, limited outdoor activities, high occurrence of overweight/obesity and air pollution are contributing factors to this nutrient insufficiency3-6,8 (Figure 2).

Results of the present study are comparable with previous national surveys regarding nutritional status of children in the four SEA countries.4-7 Health education of parents, caregivers and children must be geared towards proper food preparation, adequate food intake and good hygienic practices. Children must be encouraged to limit television viewing and engage in more outdoor activities.4-7,11 Intensified nutrition strategies (such as oral vitamin D supplementation and iron and vitamin A food fortification) are recognized as a basic pillar for reduction in nutritional deficiencies.