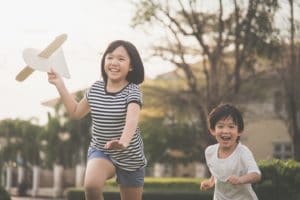 Human breastmilk, with its unique combination of nutrients and other functionally active components, is the optimal nutrition for infants. When cow milk-based formulas are used to supplement infant feeding, it is important to note that the normal digestion and absorption of nutrients in these formulas involve interaction of the gastrointestinal tract with the proteins, carbohydrates (e.g., lactose), fats, prebiotics and probiotics found in each infant formula.

Lactose is the primary carbohydrate found in milk, providing energy for growth and improving its palatability (1). Lactose is a disaccharide that is digested by lactase into galactose and glucose prior to gut absorption. Galactose is a precursor for galactolipids, cerebrosides and mucoproteins, which are necessary for the development of the brain, gut and immune system (2-3). Meanwhile, glucose is a ready source of energy for the brain and gut mucosa and promotes the growth of beneficial microbes (4).

Milk protein consists primarily of casein and whey. Whereas cow’s milk contains predominantly casein (80%), whey is the predominant protein in human breast milk (60%) (5). Research on human breast milk continues to uncover the nature and biological function of these two protein classes (6). Both are bioactive, with different amino acid composition for growth and development as well as a multitude of functionally active components for immunity and neurotransmitter production (7). Clear understanding of these two major protein classes provides a better understanding of human milk composition and function and aids in the improvement of infant formulas (8).

In infants and young children with milk allergy or poor GI tolerance to milk, formulas containing hydrolysed protein may be beneficial as hydrolysed milk proteins have reduced allergenicity, enhanced absorption with a higher transport rate of amino acids across the GI mucosa, and promotes small bowel motility. (9-10)

Milk proteins can be altered by the heating processes involved in the manufacturing of milk supplements. Repeated heating may cause the following (11):

Lipids provide a concentrated source of energy for infant growth and development, and many infant formulas incorporate palm olein as their major fat. However, hydrolysis of palm olein by pancreatic lipase releases palmitic acid as a free fatty acid, which binds with calcium, forming calcium palmitate, a non-absorbable salt. (14) This leads to reduced calcium and fat absorption as well as harder stool consistency. In contrast, a meta-analysis showed that infants fed with formulas without palm olein had significantly softer stools without increased stool frequencies compared to infants fed with palm olein-containing formulas. (15)

Prebiotics are non-digestible carbohydrates that selectively stimulate the growth and/or activity of beneficial bacteria in the gut (16). Examples include human milk oligosaccharides, fructo-oligosaccharides, galacto-oligosaccharides and inulin – the levels of which could vary among infant formulas. These short-chain carbohydrates could also stimulate GI immune cells and regulate gene expression of tight junctions in the GI mucosa (17), which could contribute to the maintenance of GI integrity and tolerance.

Probiotics are beneficial living microbes that, when conferred in sufficient amounts on the host, render beneficial effects on health. (18) Many probiotics are strains of specific bacterial species of the Lactobacillus, Streptococcus, Enterococcus and Bifidobacterium genera. These bacteria can modify the structure and function of the intestinal epithelium, the GI microbiome and the gut environment. (19) Some infant formulas are supplemented with probiotics, with the aim of potentially aiding digestion, improving bowel movement and preventing pathogenic bacterial overgrowth (19). GI tolerance is important in ensuring the optimal digestion and absorption of nutrients, and this can be affected by the various components found in supplemental milk for infants. The appropriate types and levels of macronutrients, prebiotics and probiotics, as well as the heat processes infant formulas undergo, should be considered when choosing formulas of low glycation to promote GI tolerance.