In the search for a better understanding of children’s nutritional and health status in Indonesia, Malaysia, Thailand and Vietnam, Royal FrieslandCampina initiated an in-depth multidisciplinary study in conjunction with reputed institutes/universities, known collectively as the South East Asian Nutrition Surveys (SEANUTS). FrieslandCampina conducted the research along with PERSAGI in Indonesia in the period from January to December 2011. The study involved 7,211 children aged 6 months to 12 years old, located, in 48 regencies /cities across the country. 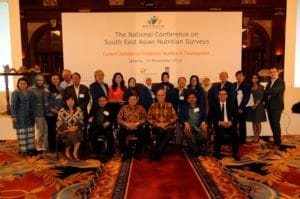 In Indonesia, the research produced comprehensive data that can lend valuable support to the Basic Health Research (Riskesdas). Researchers carried out in-depth assessments such as blood analysis, cognition observation and physical activity that served as input to establish the nutritional status of the children.

SEANUTS revealed that stunted growth among children in Indonesian is still the leading concern with a prevalence of almost 34%, followed by 22.3% cases of malnutrition. The battle against malnutrition in Indonesia has seen a major improvement with only 0.5% of underweight children compared to 8% in an earlier study. Vietnam came in last with 9.25% of underweight children, Thailand with 6.3% and Malaysia with 5.51%.

In contrast, the number of Indonesian children suffering from overweight and obesity remains low at an incidence of only 4.0%. According to Dr. Sandjaja MPH, Indonesia SEANUTS principal investigator, malnutrition often occurs in children living in isolated villages in the eastern parts of Indonesia such as Papua and East Nusa Tenggara. Research showed that children with severe malnutrition are under threat of losing 13% of their intelligence quotient (IQ). As for children suffering from stunted growth, while they are likely to gain weight later on, they are nevertheless prone to infectious degenerative diseases as they grow up.

In response to the findings, FrieslandCampina Indonesia Corporate R&D Manager Victoria Valentina said, “Children with stunted growth tend to have a lower level of intelligence compared to children with normal body height. This unfortunate situation has prompted the FrieslandCampina Institute to speed up its efforts to help improve Indonesian children’s nutritional status such that the country’s subsequent generations will grow up more healthily.”