Protein plays a role in building and maintaining body tissues, such as muscle and bone. Proteins are made of smaller building blocks called amino acids. There are 20 different types of amino acids, 9 of which are essential. Milk protein is considered high quality protein because it contains all 9 essential amino acids (EAAs) in relatively high quantities.

Milk and other dairy products plays a role in growth 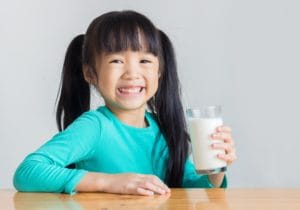 The Dutch are currently the tallest people in the world. The population grew taller by around 20cm over the past 150 years. Research suggests the growth in height is partly attributed to the heavy consumption of dairy products (Schonbecket al., 2013 Pediatric Research).

According to in vivo studies, a possible explanation is that height growth is controlled by the mechanistic target of rapamycin complex C1 (mTORC1) (Laplante and Sabatini, 2012). When specific amino acids are deficient in the diet, mTORC1 senses the deficiency and represses protein and lipid synthesis and cellular growth (Laplante and Sabatini, 2012). Thus, a sufficient dietary intake of EAAs is necessary to meet the body’s requirements for normal height growth (Semba, 2016). Further human studies, particularly in children, is necessary to confirm this hypothesis.

The classification of protein quality, known as the Protein Digestibility Corrected Amino Acid Score (PDCAAS) is determined on the basis of 3 characteristics (FAO, 1991):

Milk protein scores well for these 3 items and has a PDCAAS of 1.0. Therefore, it is regarded as a high quality protein. Nevertheless, the PDCAAS method of determining protein quality has several limitations, and the FAO has advised that a new analysis method be used to measure protein quality.

The new method is known as the Digestible Indispensable Amino Acid Score or DIAAS (FAO, 2013). It takes into account the correction for digestibility differences between proteins through knowledge of the digestibility of each individual EAA and not on the digestibility of the entire protein. In the near future, the DIAAS method can more accurately determine which and how many amino acids from various protein sources are absorbed by the body.

For milk proteins, both PDCAAS and DIAAS values are well above 100%. Therefore, milk is considered a source of high quality protein as evidenced by its high digestibility factor and the surplus of EAA as compared to the reference EAA pattern (FAO 2013).

The digestibility of a protein is preferably measured at the end of the small intestine (terminal ileum). This is considered the best way to determine amino acid bioavailability in food protein for absorption and use in the body. This method also allows comparison of proteins taken from different food sources. Food may contain factors that influence the digestion process and may affect the availability of amino acids for absorption. An example of such anti-nutritional factors is the trypsin inhibitors found in vegetable protein sources (Schaafsma, 2012).

The liver can make non-essential or dispensable amino acids if dietary intake is insufficient, but it cannot produce the 9 EAAs. The 9 EAAs are phenylalanine, valine, threonine, tryptophan, methionine, leucine, isoleucine, lysine and histidine.