Rushing to school or work or simply not feeling hungry: there may be many reasons why a lot of families don’t always have breakfast. However, regularly having breakfast can be favorable for children and helps promote good eating habits from a young age onward that lasts a lifetime. 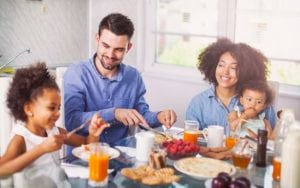 Breakfast is the first meal of the day after a long period (8-12 hours) of fasting. A healthy breakfast provides the body with energy and nutrients to start the day well (BDA, 2016). There are indications that breakfast has beneficial metabolic effects, in particular a decreased risk of Type 2 Diabetes and metabolic syndrome (Bi et al., 2015; Maki et al., 2016), and is important for long term health and wellbeing. Although observational research often shows an association between having breakfast and a healthy weight (Blondin et al., 2016; Horikawa et al., 2011; Szajewska and Ruszczynski, 2010), this is not yet confirmed by intervention studies (Leidy et al., 2016).

A possible explanation is that the association between a healthy weight and having breakfast is influenced by other lifestyle factors, such as sleeping habits, meal frequency and energy expenditure (Blondin et al., 2016, Dhurandhar, 2016; Brown et al., 2013). However, from both types of research, there are indications that having breakfast is favorable for insulin sensitivity and glucose tolerance (Bi et al., 2015; Maki et al., 2016).

A lot of scientific research focusses on the relationship between having breakfast and learning achievements in children. Three systematic reviews of intervention studies show that children who have breakfast, show slightly better cognitive performance over the short term, particularly in tasks for which memory, attention, planning and organization are important (Hoyland et al., 2009; Edefonti et al., 2014; Adolphus et al., 2013). These findings are supported by two further reviews by Ells et al., (2008) and Adolphus et al., (2016).

A healthy breakfast provides a higher intake of essential nutrients, energy and fibre. Two studies compared the intake of nutrients and energy in children that ate breakfast and children who did not eat breakfast, using data from the National Nutrition Survey in the United Kingdom (2008-2012) (Coulthard et al., 2017) and the United States (1999-2006) (Deshmukh-Taskar et al., 2010). As expected, children who ate breakfast had a higher nutrient and energy intake compared to children who did not eat breakfast. For example, children that ate breakfast had a higher intake of fiber, folic acid, iron and calcium. Therefore they complied better to the national nutritional guidelines.

The composition of a healthy breakfast

Worldwide nutritional guidelines advise a healthy breakfast providing carbohydrates, protein, fiber and vitamins and minerals. In the UK, the British Dietetic Association (BDA) advises a healthy breakfast based on the main food groups (BDA, 2016). Wholegrain starchy foods such as porridge and wholegrain bread are a convenient choice and help ensure a good fibre intake. Healthy additions to cereals are fruit and berries along with milk and/or yoghurt which naturally contains protein, vitamin B2, vitamin B12, calcium, iodine, phosphorus and potassium. Breakfast is an ideal opportunity for boosting fruit and vegetable intake, so as an alternative to cereals or yoghurt topped with fruit include mushrooms or tomatoes with poached or scrambled eggs on toast or baked beans.

Latest findings from the UK National Diet and Nutrition Survey (NDNS) years 7 and 8 found around 1 in 5 of 11-18 year-old girls have inadequate calcium intakes at an age when calcium is particularly important for rapid bone growth (Public Health England, 2018). Average fruit and vegetable intakes in 11-18 year-olds also remained lower than the recommended intake of at least 5 portions per day (equivalent to 400 g of fruit and vegetables) at 2.7 portions per day. Therefore a healthy breakfast can make an important contribution to intakes of key nutrients in children, in particular fibre, calcium, folate, iodine, iron and Vitamin D.