Protein plays a role in the building and maintenance of muscle mass. The effects of milk protein supplementation on body composition in older adults, when combined with resistance exercise, were examined in several recent randomized controlled trials. Meta-analysis of these studies shows that milk protein supplementation in combination with resistance training has a positive effect on fat-free mass in older adults.

Summary | This meta-analysis of 10 Randomized Controlled Trials shows that supplementation of milk protein in combination with resistance training is effective in increasing fat-free mass in adults aged 60 years and older. Exercise and a varied diet which includes an adequate amount of protein contributes to the maintenance of muscle mass.

Gradual changes in body composition occur as part of the natural aging process which result in the percentage of fat mass increasing and fat free mass decreasing. A healthy lifestyle which includes physical activity and a varied diet with sufficient amounts of protein can slow down the rate of these body composition changes. 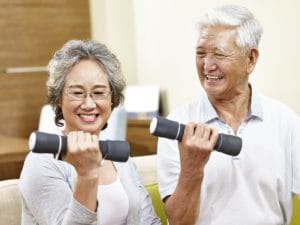 Researchers Hidayat et al (2018) performed a meta-analysis of Randomized Controlled Trials (RCTs) to examine the effect of milk protein supplementation, in combination with resistance training, on body weight and composition in adults aged 60 years or older. The meta-analysis includes 10 RCTs and a total of 574 participants with a mean age range between 60 to 80.8 years. Four studies were performed in the Netherlands, three in the United States, one in Australia, one in Italy and one in Canada.

The amount, timing and protein source differed between the 10 RCTs in the meta-analysis. The researchers provide an overview of all the study characteristics described under the Methods section of the original publication. Participants in the intervention group received a protein supplement, consisting of milk-based beverages, a combination of whey protein, casein and egg albumin, whey protein concentrate, casein hydrolysate, milk fortified with calcium and vitamin D3, milk protein concentrate, or whey protein. In seven studies the participants in the treatment group received this supplement on a daily basis, whereas in the other three studies participants received a protein supplement on training days only. The placebo group performed exercise training but did not receive a protein supplement.

The type, duration, intensity and frequency of resistance training varied between the 10 RCTs. An overview of the training characteristics is depicted in this table:

Hidayat et al (2018) concluded that supplementation of milk protein in combination with resistance training can increase the fat-free mass in adults aged 60 years and older. Exercise and a varied diet including sufficient amounts of protein contribute to the maintenance of muscle mass in older adults.