Students of the Wageningen University (The Netherlands) provided an overview of the official food-based dietary guidelines around the world, in collaboration with the Dutch National Institute for Public Health and the Environment and the Nutrition Centre in the Netherlands. They found that 93 out of 226 countries have a food-based dietary guideline, whereby hierarchical models, such as pyramids, are used equally to non-hierarchical models, such as plates. 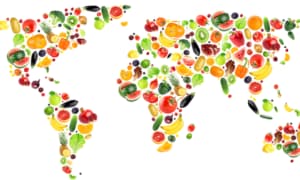 Food-based dietary guidelines (FBDG) focus on the relationship between health and overall eating patterns, instead of the relationship between health and ‘single’ nutrients. Around the globe FBDG differ, because of country specific nutrient and health issues, and economic and cultural factors, such as food preferences and eating habits. Students of the Wageningen University (The Netherlands) reviewed the FBDG worldwide in collaboration with the Dutch National Institute for Public Health and the Environment and the Nutrition Centre in the Netherlands. Their findings have been published in the European Journal of Nutrition & Food Safety (Erve et al., 2017).

An internet search found 93 out of 226 countries have food-based dietary guidelines. Most of them (79) consist of a visual representation, like the Eatwell guide in the United Kingdom and the Wheel of Five (‘Schijf van Vijf’) in the Netherlands. In 11 countries (Brazil, Chile, El Salvador, Georgia, Ghana, Indonesia, Italy, Macedonia, Mauritius, Nepal and New-Zealand) the FBDG is not a visual but a written message and in Greenland, Malawi and Sweden the FBDG mainly consists of text and a couple of visuals.

The findings of Erve et al., 2017 provides an overview of the countries with official FBDG. The appendix includes a summary of the official name of the FBDG, date of publication and the chosen food groups. Also visual aspects, such as shape and colour are depicted.