Muscular strength and muscle function are determining factors for elderly people’s mobility, independence and quality of life. A good diet and exercise play an important role in this. With regard to diet, protein and vitamin D can provide extra support, according to doctoral research by Sjors Verlaan. The FrieslandCampina Institute spoke to him about the results. 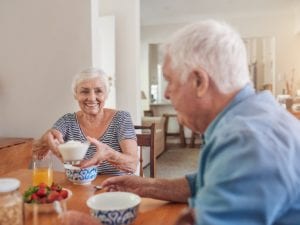 ‘It’s very important to have muscles that function properly, especially for frail elderly people. Why? When you look at the group of frail elderly people, their ability to perform routine day-to-day activities independently, such as moving around from A to B or even just getting up out of their chair, is extremely important. Muscular strength and muscle function are determining factors for their mobility, independence and quality of life. Muscles also provide the resilience needed to be able to cope with critical situations such as hospitalisation, courses of treatment and recovery.’

‘Research has shown that hospitalised frail elderly people have better survival rates when they have more muscle mass.’ This is one of the findings from Sjors Verlaan’s PhD research (EMPOWER study). ‘378 patients with an average age of 70 or older took part in this observational prospective cohort study. The majority of this group of elderly people (88%) lived at home before being admitted to hospital. A greater absolute muscle mass measured with a bioelectrical impedance measurement, and the absence of malnutrition measured with the SNAQ screening tool at the start of the hospitalisation were associated with a greater chance of survival three months after being admitted to hospital.’

‘The initial research in my PhD course showed that elderly people with greater muscle mass at the start of a hospital admission have a higher chance of survival. Considering these results, it is of course interesting to know what intervention can be effective in retaining muscle mass, in both healthy and frail elderly people. A supplement with 20 grams of whey protein, 3 grams of leucine and 800 IU vitamin D was developed for this in my PhD study. The first step was to test if this supplement was actually effective. A number of studies involving both healthy (2-3) and frail (4) elderly people showed that the supplement enhanced muscle building within 6 hours of consumption,’ explains Verlaan. ‘The second part of the research was to test if the supplement was also effective in the longer term. We did this using a Randomized Controlled Trial, with 380 elderly people with sarcopenia (age-related loss of muscle mass) who live independently taking part across 18 research centres in six countries. The elderly people in this study had low muscle mass and function at the start of this study. The intervention group (184 people) were given the supplement dissolved in 100-150 ml water with breakfast and lunch over a 13-week period. The control group (196 people) took an isocaloric control supplement with breakfast and lunch throughout the same period. Physical effects and muscle mass were measured at the start of the study, after seven weeks, and at the end of the study. The elderly people who took the whey protein supplement enriched with leucine and vitamin D for 13 weeks had a significant improvement in their muscle mass and physical performance (1).’

Diet status at start of intervention is important ‘Another question I’d already asked myself is whether the vitamin D status and protein intake before the start of the study play a role in the effectiveness of the nutrition intervention. You would expect, after all, that the nutrition intervention would be most effective in frail elderly people and patients with a possibly lower vitamin D and/or protein intake. We found, however, that the group of sarcopenic elderly people with a higher baseline vitamin D status (25(OH)D > 50nmol/L) and protein intake (>1.0 gram protein/kg body weight/day) had a significantly greater increase in muscle mass, in comparison with the control group (6). Apparently, when it comes to muscle improvement, a sufficient nutritional status is required before the muscle mass is created. I think the hypothesis could be that the protein first needs to be used by the body for its vital organs and processes before it can contribute to building and maintaining the muscles. It also appears that protein intake and vitamin D status enhance each other (1). It’s possible that vitamin D plays a facilitating role in the protein synthesis in the muscles, and so contributes to normal functioning of the muscles. In short, we found that the diet status at the start of a nutrition intervention plays a role in the effectiveness of the intervention.’

‘As far as I’m concerned, there is even more attention needed for the role that nutrition and exercise can play in healthy ageing and the course of disease in frail elderly and patients. Primary prevention is important here, to ensure that elderly people age as healthily and actively as possible, but secondary prevention also deserves more attention. I think it happens all too often that nutritional support is started too late in hospitals. Considering the results from my PhD research, I would therefore urge specific patients and frail elderly people to be provided nutritional support immediately from the first day of admission, in the form of specific diets and/or supplements, of course in combination with physical activity and training where possible, to support the recovery and to maintain mobility.’ says Verlaan.

‘The body composition changes during ageing. The fat-free mass, and muscle mass in particular, decreases and fat mass increases gradually. This is a natural process, which starts between the ages of 30 and 70, and accelerates from 70 years and above. Sarcopenia is when the decline of the muscle mass, combined with reduced muscle strength and function, increases and critical limits are reached. People speak of malnutrition when someone involuntarily loses >5% weight in 6 months or >10% in over 6 months. A group of experts recently published new criteria for malnutrition (Cederholm et al., 2018) and sarcopenia (Cruz-Jentoft et al., 2018).”