Milk has been consumed for around 10,000 years. Milk and milk products are part of the everyday diet of many. Milk naturally contains essential nutrients like protein, calcium, potassium, phosphor, iodine and vitamins B2 and B12. In recent years, there has been increasing interest in beverages based on soy, hemp, coconut, oat, rice and nuts.  In an article published in the International Dairy Journal, Chalupa-Krebzdak et al. (2018) analyse the nutrient composition of milk compared to these drinks.

Summary | Milk naturally contains essential nutrients like protein, calcium, potassium, phosphor, iodine and vitamin B2 and B12. Research conducted by Chalupa-Krebzdak et al. (2018) shows that the nutrient composition of plant-based drinks varies considerably. Plant-based drinks contain half as much protein on average than milk (1). Additionally, the amount of vitamins and minerals and their absorption is less consistent (1). That is why these researchers have concluded that, from a nutritional perspective, plant-based drinks are not always a good alternative to milk (1). 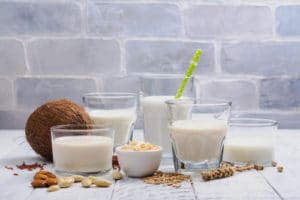 GI makes it possible to classify carbohydrate-containing foods based on the speed of carbohydrate digestion and absorption postprandial. This index reflects the direct effect of carbohydrate intake on blood glucose levels two hours after the meal. (3) Since no GI information was available for the samples used in this study, the authors report the findings of Jeske et al., (2017), which show that plant-based drinks have higher GI values than milk. (4) Milk had a GI of 46.93, while the GI of the plant-based drinks varied from 47.53 to 99.96. Low (<55 GI) and medium (56-69 GI) foods are recommended, especially for those who want to better regulate their blood sugar levels.

Calcium is needed for the maintenance of normal bones. The level of calcium varies greatly among plant-based drinks. The reason is that plant-based drinks are not always enriched with calcium. The researchers also point out that various bioactive components present in plants that can impact the absorption of nutrients must be taken into consideration. (1) Phytic acid, for instance, which is found in many cereals and legumes, binds to a significant amount of calcium, causing reduced calcium bioavailability. (1)

Milk naturally contains essential nutrients like protein, calcium, potassium, phosphor, iodine and vitamins B2 and B12. Plant-based drinks contain various nutrients not found in milk. These include soluble fibre in oat-based drinks, alpha linoleic acid in hemp-based drinks and vitamin E in almond-based drinks. The researchers noted that the amount of nutrients per product varies.

Milk is a natural source of protein, calcium, potassium, phosphor, iodine and vitamin B2 and B12. The nutrient composition of plant-based drinks varies considerably. Nonetheless, the researchers have concluded that, from a nutritional perspective, plant-based drinks are not a suitable alternative to cow’s milk.