Protein is popular among athletes, but there is also a great deal of attention being paid to extra protein in the diets of the elderly. What scientific knowledge backs this up, and how can you apply it in practice? The FrieslandCampina Institute spoke with Jorn Trommelen about his research at the Maastricht University, in the Netherlands, on the effects of protein on the muscles and the effects of consuming protein before sleeping. 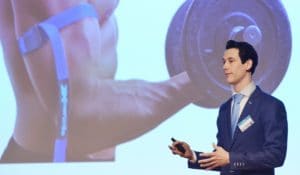 As a part of the research group headed up by Luc van Loon, Professor of Exercise Physiology, Jorn Trommelen is studying the effects of protein on the muscles. There are strong indications that consuming protein before sleeping maintains the synthesis of muscle protein during the night. This is beneficial for the building of muscle and for the repair processes that occur during the night (1-4).

‘As a professional, pay attention to the intake of protein at breakfast and before sleeping. These are good protein eating opportunities that are not optimally utilised by athletes or by the elderly. More gains can be made from this approach!’

What is the role of protein in the diets of various types of athletes?

‘For power athletes, the consumption of 1.6 grams of protein per kilogram of body weight is advised (5). For an athlete who weighs 70 kilograms, this means some 110 grams of protein per day. For endurance athletes, the emphasis has long been on the intake of sufficient fuel, or carbohydrates, and not so much on the consumption of proteins. Yet, protein plays a role in the generation of mitochondria, which are also referred to as the power plants of the cell. More mitochondria in the muscle cells ensure greater energy metabolism in the muscle, which is beneficial for endurance athletes, who need a lot of fuel during longer periods of exertion (6).’

What is the best way to distribute protein consumption throughout the day?

‘The starting point is to eat 20 grams of protein per meal. There are clear indications that 4 to 5 hours between meals is optimal, so that the body has access to sufficient protein on a continual basis (1). In practice, this already occurs with the rhythm of breakfast, lunch, and dinner. And after an intensive training session or competition, 20 grams of protein is also advised. The muscles are then at their most sensitive with regard to repair, and your body uses the protein optimally at those times (1). As an athlete, you may choose to eat or drink something rich in protein as soon as you get to the changing room. If this is not possible, then you can also eat a protein-rich meal at home an hour later, for example. Studies have been performed into whether more than 20 grams of protein after exercise is even better, but this actually does not have much of an effect (7). Besides the three usual meals, there is another opportunity to eat a protein-rich meal before going to sleep, approximately 4 to 5 hours after the evening meal (2-4).’

What is known about pre-sleep protein consumption?

‘The most recent research shows that the time right before going to sleep is a good protein opportunity for continuing to stimulate muscle protein synthesis throughout the night (2-4). This bridges the 12 hours between the evening meal and breakfast. For athletes, 30 grams of protein before sleeping is a good starting point for building extra muscle mass and power (3). This is more protein than is recommended at other meals because it is some 8 to 10 hours before breakfast. It is possible that consuming 40 grams of protein before sleeping provides even better results, but this is not yet known precisely (2).’ Is there a difference between protein sources?

‘Proteins are often subdivided into animal-based and plant-based proteins. If you consider several proteins discussed in the research, you see that animal-based proteins are more effective than plant-based proteins, for example when you compare milk proteins with soy proteins (8). One of the reasons for this is that animal proteins contain more essential amino acids (9). In practice, people do not eat individual proteins but a variety of foods which often contain a combination of animal and plant proteins. In fact, it would be interesting to do more research into the effect of a combination of various sources of protein on the build-up of muscle mass. Athletes, of course, also use protein shakes, which consist of one source of protein or of a specific combination of amino acids. In that case, it is relevant to know that it is primarily the essential amino acids and proteins with a complete amino acid profile that contribute to muscle protein synthesis. This composition is different for each protein shake.’ What do you advise athletes to eat while training or during competitions?

What is the current average protein intake of athletes?

‘Top athletes in the Netherlands eat an average of 1.5 grams of protein per kilogram of body weight. You see that this quantity of protein is mostly eaten during the three main meals of the day: breakfast, lunch, and the evening meal. Studies of elite Dutch athletes show that 38% of the total protein intake is consumed at the evening meal and 19% and 24% at breakfast and lunch, respectively. In 58% of the Dutch elite athletes in this study, the protein intake at breakfast was less than 20 grams and the protein opportunity before sleeping was not always fully utilised (13). As a professional, pay attention to the consumption of protein at breakfast and before sleeping. There are additional gains to be made with this approach!’

What can you say about protein for older people?

‘In the Netherlands, the intake of protein in people over the age of 65 who still live at home is 1.1 grams of protein per kilogram of body weight. Elderly people in care institutions have an average protein intake of 0.8 grams per kilogram of body weight. This average intake corresponds to the protein recommendations for the elderly made by the Health Council of the Netherlands. More recent research, though, indicates that 40 grams per meal is optimal for older people (14). However this does not mean to say that the body does not make use of a lower protein intake. The extra protein eating opportunity before sleeping also seems to be effective in older people for maintaining the synthesis of muscle protein during the night (3). When you think of protein shakes, you often think of strength athletes, but in fact these shakes are also very good for older people because 40 grams of protein per meal is quite a substantial amount to consume  via the normal diet. In addition to protein consumption, exercise is also important (15). For example, allow older people in the hospital or in care institutions to go to the toilet themselves, if possible. This stimulates the muscles, which in turn makes them more sensitive to the proteins. Exercise does not have to be sports!’ What types of research will you focus on in coming years?

‘I would like to develop, with scientific evidence, the ‘optimal protocol’ for the protein eating opportunity before sleeping. There are still so many questions to be answered, such as is consuming more than 30 grams of protein even better? There is also a great deal of focus on the effects of protein on muscle. It may be that protein also has a specific effect on the tendons, which could possibly prevent injuries from occurring. These are research topics that, in my opinion, are relevant and that can contribute to optimising the diets of athletes and the elderly.’

Do you have any tips for dietary and health professionals?