Recently, the Joint Child Malnutrition Estimates (JME) published their annual report on stunting, wasting and overweight estimates of children under five years old. The JME consists of United Nations Children’s Fund (UNICEF), the World Health Organization (WHO) and the World Bank. In this report, country-level estimates of malnutrition are shown for the first time. 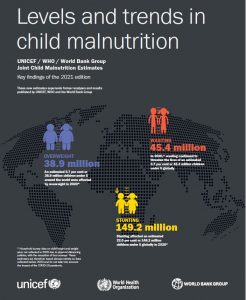 At a country level, improvements were seen in reaching stunting goals: at least two-thirds of countries see a reduced number of children who are stunted. However, no improvements, or even deteriorations, on reducing overweight were observed. In this article, we share the key points of the report.

The report classified a child affected by stunting as one who is too short for his or her age. Children suffering from stunting possibly endure irreversible physical and cognitive damage. According to the report, the total percentage of stunting in children under five worldwide has declined since 2000. The total number of children who are stunted is decreasing in all continents except Africa. The report stated that an estimated 149.2 million children under five years old are stunted in 2021. To reach the 2030 target, a faster decline in stunting rates is necessary.

The publication described a child affected by wasting as a child who is too thin for his or her height. Wasting is an acute form of malnutrition that results from a period of rapid weight loss or not being able to gain weight. Severe wasting increases the risk of death. The report stated that currently wasting percentages prevail at distressing levels. In 2021, the estimated number of children under five years old affected by wasting is 45.4 million. More than 50% of all children who suffer from wasting live in Southern Asia.

According to the report, a child affected by overweight is a child who is too heavy for his or her weight. This is the case when energy intake exceeds energy output in the long term. Being overweight increases the likelihood of developing non-communicable diseases later in life. The report showed that the percentage of overweight children under five years old is still increasing, globally. It is estimated that 38.9 million children under five years old are overweight in 2021.

Due to physical distancing measures, less household survey data on child height, weight and age were collected. Therefore, the estimates of the 2021 report are mostly based on the data gathered before 2020. report expected that during COVID-19, percentages of stunting, wasting and overweight likely increased. This increase was expected since household wealth has decreased, fewer healthy and affordable foods were available, essential nutrition services were limited and possibilities for exercise were decreased.