Globally, the incidence and prevalence of vitamin D insufficiency or deficiency is on the rise (1). Approximately more than half of the world’s population have vitamin D insufficiency or deficiency (1). Fortunately, this disorder can be easily modified with minimal cost. Recently, Wimalawansa et al (2018) published a review on the function of vitamin D and its supplementation in various populations.

Summary | Eating foods containing vitamin D and exposure to sunlight are essential to maintain a healthy vitamin D level. Both the Institute of Medicine (IOM) and the European Food Safety Authority (EFSA) recommend a daily vitamin D dose of 15 mcg (600IU) for adults (2,3). According to the review by Wimalawansa et al (2018), populations with difficulty obtaining sufficient sunlight exposure for vitamin D production may need supplementation with vitamin D as they may be unable to obtain enough of said vitamin D from food sources. Wimawalansa et al (2018) noted that 1000-2000 IU/day of vitamin D, in addition to adequate calcium intake, may be necessary to maintain serum 25(OH)D levels over 75 nmol/L (1). For high-risk individuals, vitamin D levels as high as 4000IU/day may be advisable. 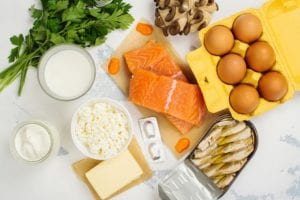 According to the EFSA, the normal targeted serum level of vitamin D is around 50 nmol/L (3). Similarly, the IOM recommends serum levels of 30-50 nmol/L for vitamin D as that is the range that supports maximum calcium absorption (2). In the review by Wimawalansa et al (2018), the authors defined normal serum level as 75 nmol/L and noted there are debates surrounding this figure (1). They also wrote that teenagers, pregnant and breastfeeding women, and those with certain diseases, require higher levels of vitamin D. In the review, the authors used the range of 40-75 nmol/L for vitamin D insufficiency and ≤39 nmol/L for deficiency.

Vitamin D inadequacy and the role of supplement

Improving vitamin D inadequacy is easy and cost effective (1). Safe sunlight exposure is the best method to achieve sufficient vitamin D levels on a regular basis. Only a limited number of foods contain meaningful quantities of vitamin D, and some examples are fatty fish and sun-exposed mushrooms. Some foods such as milk and butter are fortified with vitamin D (3). However, most regulatory bodies do not allow the optimal level of fortification of food with vitamin D, which can lead to an insufficient dietary intake of the vitamin. As such, Wimalawansa et al (2018) are in favor of vitamin D supplementation for specific groups of people.

Some individuals may benefit from vitamin D supplementation. For instance, those who are unable to obtain optimal sunlight exposure due to institutionalization (eg, nursing homes, prisons), unable to  efficiently generate vitamin D in the skin and have conditions that cause decreased intestinal absorption or increased catabolism of vitamin D. Further elaborating, the researchers wrote that among those who may benefit from vitamin D supplementation are patients who experienced rapid weight loss due to natural causes or secondary to gastric bypass surgery, those who are taking anti-epileptic and anti-retroviral drugs, people living in northern and southern latitudes during winter months, those with darker skin and those who avoid the sun (1).

The Institute of Medicine’s (IOM) report on vitamin D suggests that doses of 600IU/day is sufficient to achieve serum 25(OH)D levels up to 50 nmol/L in healthy persons with minimal exposure to sunshine (2). Conversely, many studies noted that at least 75 nmol/L is necessary to prevent most disorders, including secondary hyperparathyroidism (1). Moreover, to obtain a serum level of 75 nmol/L, supplementation with doses between 1000 and 2000 IU/day is necessary (1).

Wimalawansa et al (2018) wrote that a supplement dose of 5000 IU/day is considered the safe daily upper limit for supplementation. The risk of toxicity is non-existent when the dose of vitamin D supplement is lower than 5000 IU/day. To stay cautious on potential toxicity, they recommended to maintain serum 25(OH)D levels between 75-125 nmol/L and not to go above 150 nmol/L. In their conclusion, the authors mentioned moderation is the way to go for calcium and vitamin D. This is in line with the advice that many people may need calcium supplements—not exceeding 600 mg/day—to achieve the recommended daily calcium intake of 1200 mg. However, for vitamin D, the authors noted that higher levels of  1000-4000 IU may be necessary and this range is much higher than the recommendation by national or international organizations.

Safe sunlight exposure is the best method to obtain optimal vitamin D levels. However, supplementation may be necessary for certain groups of people such as those who are institutionalized or have disorders related to vitamin D generation, absorption or catabolism.

Another review on vitamin D, by Bolland et al (2018), suggests that vitamin D supplementation does not prevent fractures or falls, and has no clinically significant effects on bone mineral density (4). The results were consistent regardless of the vitamin D dosage. The authors noted that there is little justification to use vitamin D supplements to maintain or improve musculoskeletal health.

However, it is important to note that when there is sufficient vitamin D, the beneficial effects of vitamin D supplementation on bone health are less or not visible (5). In the Bolland et al (2018) review, only a few studies involving vitamin D deficiency were included.