The World Health Organization (WHO) supported systematic reviews on the intake of free sugars and their effects on non-communicable diseases (NCDs), mainly overweight/obesity and dental caries. The systematic reviews addressed these questions: 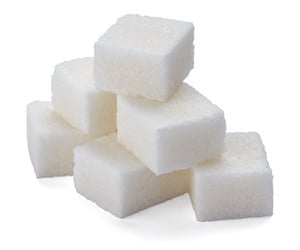 With the rise in NCDs globally, there is a need to modify consumption of free sugars in adults and children.2 Free sugars include mono- and disaccharides added to beverages and foods by the manufacturer, cook or consumer, and sugars naturally present in honey, syrups, fruit juices and fruit juice concentrates. A high intake of free sugars is an emerging concern because of its association with poor diet quality, overweight and obesity – all risk factors for NCDs.3

Meta-analysis of five randomized intervention trials in adults with unrestricted food intake in their diets showed an association between reduced intake of free sugars and a mean reduction in body weight of 0.80 kg (95% confidence interval [CI]: -1.21, -0.39). The test subjects in the studies were allowed to eat ad libitum but were randomized to either a low sugar diet, a high sugar diet or a control usual diet arm. At the end of the trial period, a reduction in body weight was observed in the low sugar group as compared to the usual or increased sugar intake groups. Similarly, meta-analysis of ten trials involving increasing intake of sugars (mostly from sugar-sweetened beverages) indicated a mean increase in body weight of 0.75 kg (95% CI: 0.30, 1.19) versus the usual (lower) sugar intake groups. The overall quality of all available evidence for studies in adults was considered to be moderate. On the other hand, iso-energetic exchange of dietary sugars with other carbohydrates and/or macronutrients showed no change in body weight, indicating that modifying intake of free sugars in free living condition results in an alteration of energy balance.  In children, the quality of evidence for an association between a reduction in free sugars intake and decreased body weight was similarly considered to be moderate, however, the quality of evidence for an association between an increase in free sugars intake and increased body weight was determined to be low.1,4

Dental caries is considered to be the most prevalent NCD globally, with similar etiology in children and adults.5,6 Since dental caries tracks from childhood to adulthood, its negative health effects are cumulative.7,8 Furthermore, dental caries is very costly to treat and poses a threat to healthcare budgets.4,5,9

A systemic review on dental caries and its association with free and/or total sugars intake was done using 55 studies – 3 intervention, 8 cohort, 20 population and 24 cross-sectional studies.

There was considerable variability in the data-reporting formats such as the range and types of outcomes, the ages of studied populations, variations in study length, the range and variety of interventions, the time points at which outcomes were measured, the years over which the studies were conducted (from 1950 to present), and differences in, or lack of information on, fluoride exposure. So, no meta-analyses were possible. 1,9

Studies were evaluated according to the GRADE system which rates the overall quality of evidence by judging design limitations, consistency of results across the available studies, precision of results, directness and likelihood of publication bias, magnitude of effect, evidence of a dose response, strength of association, and the direction of plausible biases. Eight cohort studies provided moderate quality indicating that dental caries is lower when free sugars intake was <10% of total energy intake.1,9

Based on the available evidence, WHO strongly recommends a reduced intake of free sugars to less than 10% of the total energy intake1,4,9 and possibly to below 5% of total energy intake1,7-9 throughout the life course of both adults and children. Countries with low per capita sugars intake should not increase their levels as well.3 Excess body weight associated with free sugars intake results from excess energy intake. Based on the observational analyses WHO expects that free sugars intake of less than 10% of total energy intake is favorable to decrease the burden of dental caries.1,9 Since there is no reported evidence of adverse effects of consumption of intrinsic sugars (incorporated within the structure of intact fruit and vegetables) and those naturally present in milk, the recommendations of the WHO guidelines focus only on the effect of free sugars intake.1 Further researches are recommended as well to establish stronger quality of evidence for future guidelines.