During exercise the body loses fluid. To prevent dehydration it is recommended to minimize the amount of fluid lost. What advice can you give to the athlete and how does the Beverage Hydration Index help? 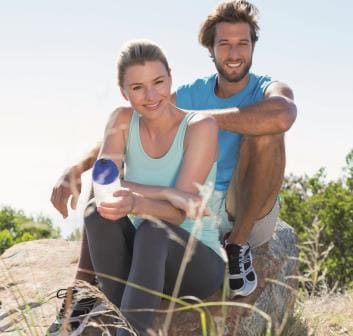 The amount of fluid lost via sweat during exercise depends on the ambient temperature, humidity, level of activity, body weight, genetic predisposition, acclimatisation and fitness level. In this article 5 questions & answers about fluid intake during exercise.

1. How much fluid does an athlete lose during exercise?

Fluid loss can vary considerably between individuals from modest losses of (0.3 litre per hour) to as much as 3 litres per hour (1). Loss of fluids of >2% of the body weight may lead to a reduction in aerobic capacity during exercise, as well as decreased cognitive functioning (1-2). Apart from fluids, minerals (electrolytes) are also lost via sweat, particularly sodium and chloride and to a lesser degree potassium and magnesium. Here large differences between individuals are also observed. (1-2)

2. What is the best timing?

The aim is to prevent dehydration where possible. Therefore it is wise to start drinking early on in the training session and to make the most of fluid breaks during a match. Then continue to sip fluids little and often rather than relying on thirst as this is not a good indicator of the need to drink. Once thirst is experienced, there is already is a shortfall in fluid intake.

3. How should lost fluids be replenished?

Lost fluids should be replenished in order to prevent dehydration, which in turn will affect performance and optimum functioning of the body. Fluid loss should ideally be kept below 2% of body weight. For a person weighing 75 kg this amounts to a maximum of 1.5 kg weight loss as a result of fluid loss. (2-3) The quantity consumed should be tailored according to individual needs as this depends on factors such as the duration of exercise and the opportunity to drink during the activity. Also the volume of fluid that can be tolerated during exercise may vary as some individuals may be susceptible to gastro-intestinal distress (1). Therefore it is important to trial and practise drinking schedules during training. (3)

4. What can an athlete drink?

The most important factors influencing rehydration and replenishment of fluids, during and after exercise are the volume and the composition of the drink consumed. Drinks containing electrolytes and carbohydrates can help support the maintenance of fluid and electrolytes balance during the exercise.

5. What is the Beverage Hydration Index?

The aim of fluid intake is to replenish the fluid lost during exercise so it is important that the majority of fluid consumed is retained in the body rather than lost via urine. In order to provide more guidance this, Maughan et al., (2016) recently developed a beverage hydration index (BHI), which is a measure of the extent to which the body can absorb and retain the fluid from a drink. During the development of this index the effect on fluid balance of 13 different drinks, from water to milk and an oral rehydration solution (ORS) to beer, were compared. Subjects drank equal quantities of the different drinks, after which the urine volume was measured. ORS and skimmed and full-fat milk produced significantly less urine than other drinks such as water, tea, coke and a sports drink did (see figure 1). A lower urine production is an indication that the body can ‘use’ more fluid for recovering the fluid balance. (8)

FIGURE 2  Urine production after the consumption of several drinks